Mahiya is exceptional, with lots of attention to detail and many unique ideas and features.  She is a custom, professionally built boat (at a licensed yard in the Philippines). Her original owner, Raymond Barkley, personally supervised and took part in the build. For 2 years, 6 days each week, he and a well-trained, highly skilled crew worked meticulously and methodically.  Construction started in January 2007.  She was completed and launched December 2008, 23 months later.  Outfitting continued for several years. After sailing in the Philippines for a year she was shipped to Florida.  For several years she operated as a charter vessel in Charlotte Harbor.  In 2014 Mahiya was sold to her current owners, and shipped to the Caribbean to begin her new life as a charter vessel in the Virgin Islands. She is unique in many ways. She is the first Tiki 30 ever strip planked. The hulls are beautiful. The builders used strips of lauan (a Philippine hard wood) milled on site and perfectly molded to create nice lines and eliminate the "step" at the water line. The hulls were then glassed inside and out using West System Epoxy and cloth. All bulkhead to hull joints have large fillets and cloth for extra strength. All hatches have been built with storm coamings. There is even a 3/16" stainless steel strip running down the entire length of the keels for protection while beaching her.  She is powered by a Yamaha 9.9 High Thrust Long Shaft Sail Drive with Tachometer and Hour Meter.  The mast is carbon fiber, as is the aft net tube and the bimini frame, all custom built for Ray in New Zealand.  All 6 nets were custom built in Saint Petersburg, FL. The working sails were made by Hyde Sails. The jib is on a Pro Furl (roller furling system) and has a foam luff added for better shape while furled.  The main sail has three reef points. There is also a screecher sail on a continuous loop furler. All sails are on 2:1 purchases for ease of raising and she is set up for single handed sailing with all lines leading back to the cockpit. She is a pleasure to sail for both skipper and passengers! 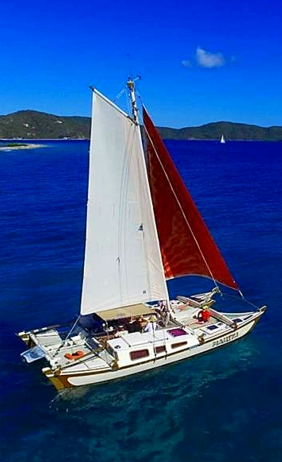 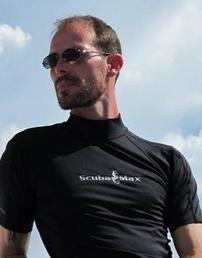 Captain Karl Pytlik is originally from Connecticut and transplanted to the Virgin Islands in 2005.  He has since been involved in a myriad of environmental efforts including volunteering with the National Parks Service, running educational programs and developing a national management plan for dealing with invasive species. He received an award form the EPA for his work in establishing the first recycling program on St. John.  He was a founding member of the CORE Foundation (Caribbean Oceanic Restoration and Education) in which he gave many school presentations and spearheaded the Lionfish management efforts on St. John.  He assisted the Jost Van Dyke Preservation Society in educating children about coral reefs, sailing, and snorkeling.  Karl has also volunteered for Team River Runner, with the Wounded Warriors program, which brings disabled veterans to St. John as part of their rehabilitation.  He was named Virgin Islands Person of the Year in 2011 by our local PBS station for his tireless efforts in environmental awareness and philanthropy.  He currently leads a campaign to end the sea turtle hunting season in the British Virgin Islands, and lives on St. John. 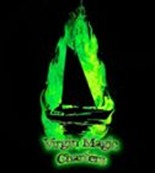